Earlier this month , Dennis Green blew up at a reporter during his postgame press conference. That'll happen when your team blows a 20 point lead in the fourth quarter. When coaches get angry, it makes for great theater, but why? I suppose on the simplest level it's funny to see somebody melt down. The real reason, I think, is because it gives us a raw glimpse into the mind of a coach, a visible demonstration of the passion that either makes them succeed or keeps them form succeeding.

Thanks to YouTube, we can watch some other classic examples of the coaches meltdown.

Ken Shouler has a great piece on ESPN.com about the legacy of Red Auerbach entitled "The Consumate Coach." While our first thoughts of the late Celtics great are about all his records, Shouler reminds us of the coaching style that made all of those wins possible.

Time and again you hear Celtics describing Red as "a player's coach." To the world outside his own huddles and locker room he was ornery and miserable, a boisterous dynamo who peered at you through cigar smoke after his troops had impaled yours.

But not with his own players. He supported them. He had their backs. They knew it, so they did everything to please him. He emphasized people far more than X's and O's.

"Red Auerbach convinced his players that he loved them," said Earl Lloyd, the NBA's first African-American player. "So all they wanted to do was please him."

It was the best way of getting the maximum from his squad. He did it to squeeze even the slightest of advantages from situations. Sure, he could be the consummate actor on the sidelines --waving his arms, stomping his feet, tearing at his hair. He received more fines and was thrown out of more games than any other NBA coach. He was even tossed out while coaching the All-Star Game in San Francisco's Cow Palace in 1967, Rick Barry
recalled with a laugh.

What does Lloyd remember most about Auerbach's teams?

"That they won more than anybody else," he laughs. "That about sums it up."

Ken is one of my favorite basketball writers -- heck, one of my favorite writers, period. I had the pleasure of working with him on "Total Basketball: The Ultimate Basketball Encyclopedia" about five years ago. We also worked together on a boxing encyclopedia with the late Phil Berger and the inimitable Bert Randolph Sugar. What I like about Shouler's writing is that he understands that good sports stories aren't about numbers or big plays; they are about complex characters and their strength of will.
Posted by Sean Lahman at 11:16 AM

Girls on the Football Field 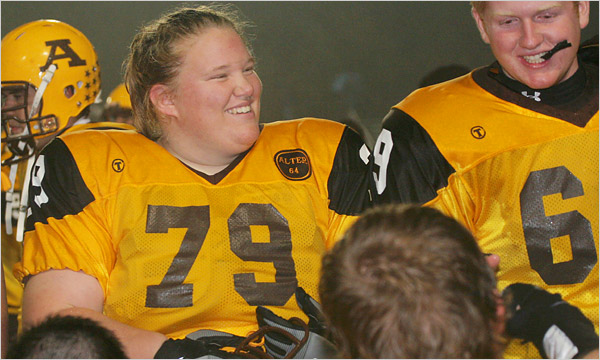 The idea of girls playing football is becoming less of a novelty. About a third of the teams in my son's youth football league had a female player, and I'm sure that's not just a local trend.

A recent story in the New York Times illustrates what I think is the most common story for these gridiron girls... they're following in the footsteps of an older brother.

Holley is 5-9 and weighs 310 pounds, and although both her father and brother tried to steer her towards other, more traditional pursuits, her play on the field convinced them that football is the game for her.

Mr. Mangold has also overcome his initial objections. He stood in the last row of the home bleachers in a steady rain Friday, without an umbrella, and cheered for Holley, whom he affectionately calls “my little buttercup,” every time she stuffed her ponytail into her helmet and trotted onto the field.

“She plays the game well,” he said. “That’s more surreal, actually, than what Nick’s doing.” 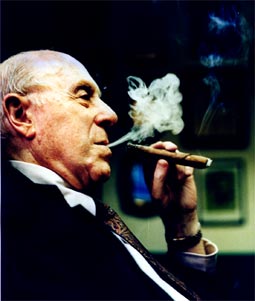 The deaths of three major sports figures hit the news today. Red Auerbach, the legendary coach of the Boston Celtics, died at the age of 89. He won nine NBA Championships, including eight in a row from 1959-1966. He also retired with more wins than any other coach (a record which was surpassed by Lenny Wilkens in the 1994-95 season). Auerbach enraged opponents with his habit of lighting a cigar at courtside when he felt his team had ensured their victory.

Joe Niekro, who spent 21-years pitching in the majors, died suddenly after suffering a brain aneurysm. The knuckleballer won 221 games with seven teams, but I'll always remember him best for an incident when he was with the Twins in 1987. While pitching in a game against the Angels, Niekro was accused of doctoring the ball with an emery board. When umpire Steve Palermo came to the mound and asked the pitcher to empty his pockets, Niekro pulled the board from his pocket and tossed it to the ground in a futile attempt to conceal the evidence of his crime. Needless to say, it didn't work, and Niekro ended up with a ten-game suspension.

Finally, we have the sad case of former heavyweight champion Trevor Berbick. His body was found in a church courtyard in Kingston , Jamaica, in what police believe was a homicide. Berbick won the heavyweight title in 1986, holding it for just eight months before losing it to 20-year old Mike Tyson. Berbick first came to the public spotlight in 1981 when he beat Muhammad Ali in what would be the last fight of Ali's career.
Posted by Sean Lahman at 5:19 PM