Just in Time for Spring Training 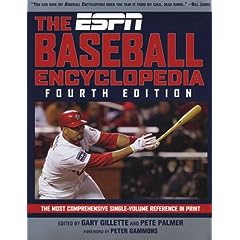 Just a quick plug for the new ESPN Baseball Encyclopedia, which should be arriving in stores any day now. It's the fourth edition of this series, updated through the end of the 2006 season with more stats and history than you'll know what to do with.

I'm a contributor to this edition, not an editor, but it marks the seventh time my name has appeared on the title page of a baseball encyclopedia.

There's still a foot of snow on the ground here. Can it really be time for pitchers and catchers to report?
Posted by Sean Lahman at 2:47 PM

So How's the Book Coming?

In the late seventies, James began writing an annual book he called "The Baseball Abstract," reflecting on the previous season and offering analysis, not just of the teams and players but of more fundamental issues. James examined subjects such as the impact of ballpark dimensions, the value of a stolen base, and the usefulness of minor league statistics as a predictor of major league performance. 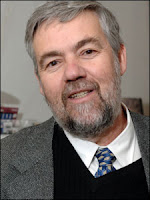 James self published the first five editions, and after a favorable mention by Daniel Okrent in Sports Illustrated, he signed a deal with Ballantine Books for future editions. By 1984, the book was selling 150,000 copies a year, pushing as high as #4 on the New York Times Best Seller List. He has often been described as a statistician, but James approached the number as a means to an end. He asked basic questions about the game and used the scientific method to try and find answers. Although James is not a household name, his work has shaped an entire generation of sportswriters. In 2006, Time Magazine named him to their list of the 100 most influential people in the world.

In 1985, James wanted to take the tools and methods he had developed for analyzing current players and apply them to players from earlier eras. And that's the same path that I'm following. Having written pro football annuals and covered the current game for five years. I was anxious to turn my attention to historical subjects, and that's what I've been doing for the past two years.

I'm eager to finish, not just because I've been working on it for so long, but because I think the book is turning out pretty well.
Posted by Sean Lahman at 2:37 PM