For over a year, I've been working a new book on the great players in pro football history. My research has helped me to uncover some great stories of overlooked players, many of whom played before World War II. One of the stories I'm most interested in telling is that of Fred "Duke" Slater, who played from 1922 to 1931. He was a star lineman for several teams, most notably the Chicago Cardinals, and universally regarded by his contemporaries as one of the great players of his era. He was also one of a handful of African-Americans playing pro football, more than forty years before Jackie Robinson broke baseball's color barrier.

Slater isn't in the Hall of Fame, and Dan Daly of the Washington Times offered a good explanation for why he has been overlooked in a column earlier this year.

There are a number of reasons for this, none of them particularly acceptable. One is that Slater spent his career with second-tier teams such as the Chicago Cardinals, Rock Island (Ill.) Independents and Milwaukee Badgers, two of which no longer exist. (The Cardinals, of course, are in Arizona now.) To the winners go the Hall of Fame busts. Another is that Duke died in 1966 at 67 and didn't have any children, so there's no one to stump for him. Then there's the problem of playing a position -- tackle in the single-platoon days -- for which there are no statistics, only the occasional newspaper mention.

But the most obvious reason probably makes the most sense: Slater was a black man in a white man's world, plenty good enough to play but lacking the "necessities" for canonization (to borrow Al Campanis' infamous term). Indeed, the scant number of Hall of Famers from the '20s, coupled with Pollard's long-delayed election, make you wonder if the NFL is trying to forget that benighted era -- which was followed by an even more reprehensible period (1934-45) in which blacks were excluded entirely. The history of reference publishing has fascinated me, not just because of my own work in the field, but because of the characters who have inhabited that world. Building an authoritative reference work on a subject is a massive task which requires an editor to approach his field of study with obsessive zeal. Take for example the Oxford English Dictionary, which not only provides definitons for words but detailed etymologies and historical citations for each word's usage.

Simon Winchester has written a fascinating book on how the OED came into existence, under the guidance of Scottish lexicographer James Murray. He solicited the help of volunteers across the world for his massive undertaking, and one of the biggest contributors was a mysterious man named William Minor. Wikipedia offers this description:

[Minor] proved to be one of the most effective of the volunteers, systematically reading through his library, and compiling lists of the occurrence of words. These he kept current with the words needed in the volume being worked on at the time. As his lists grew, he was able to supply quotations on demand for a particular word.

The quantity and quality of Minor's work was so substantial that Murray felt compelled to go see the man in person. He traveled to London, only then to discover that Minor was not a professor or a bookseller, but rather an inmate at the Broadmoor Criminal Lunatic Asylum.

Winchester's book, called The Professor and the Madman, is a fascinating story, even if you're not particularly interested in the history of dictionaries.
Posted by Sean Lahman at 8:05 AM

What if the 1965 Packers met the 1985 Bears? Or the 1927 Yankees faced off with the 1975 Reds. A great online tool lets you simulate those matchups. At the What If Sports website, you can create a sim matchup for any NBA, NFL, NHL, or MLB teams, plus a large number of college basketball teams. The engine behind this seems to be pretty robust. It doesn't just generate a final score but a complete play-by-play account of the game, and of course box scores and statistics. Single games are free, or if you're more hardcore you can join a simulation league.
Posted by Sean Lahman at 9:58 AM

Here's the most interesting statistic of the NFL season. Through nine weeks, every single NFL game has been sold out at least 72-hours in advance. Since the league adopted it's blackout policy in 1973 (to keep games off the local airwaves if tickets remained unsold), there had only been 13 weekends when every scheduled game was a sellout.

In fairness, some of this has been achieved through buy backs, where a team like the Forty-Niners "buys" the unsold tickets to achieve a sell out. This lets the game be televised locally, and at least in theory, helps keep the local fan base interested. Another trick is being used in Jacksonville, where they cover whole sections of the stands with tarp to reduce the seating capacity. Plus, the NFL is reporting tickets sold -- not how many people came through the turnstile.

But the bottom line is that the NFL's popularity continues to grow in a marketplace where other sports are seeing their audiences shrink. Television ratings are up ten percent for NFL games on FOX, the new NBC Sunday Night Football game is a huge hit, and ESPN is drawing record audiences for it's Monday Night broadcasts. At the same time, ratings for NASCAR dropped dramatically and this year's World Series ratings plunged to a record low.
Posted by Sean Lahman at 3:46 PM

The Cubans are Coming

On Tuesday, a grand jury in Miami indicted a baseball agent on charges of smuggling Cuban ballplayers into the United States. The indictment alleges that Gus Domiguez brought more than forty defectors across over a series of trips in a 28-foot speedboat. While some of them were not ballplayers, several of the individuals identified have already gone on to play in the minor leagues.

The ballplayers, like all Cubans, are subject to restrictive emigration policies that keeps them from pursuing career opportunities in the United States. 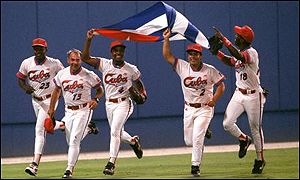 The declining health of Cuban President Fidel Castro has led to speculation that this situation could soon be changing. The end of the U.S. trade embargo and the normalization of relations between the two countries could let loose a flood of Cuban baseball players eager to showcase their skills in the major leagues.

If the results of this spring's World Baseball Classic are any indication, there are some great ballplayers in Cuba who would be Major League stars if they were allowed to emigrate.

In the last decade, there has been a nostalgic resurgence of interest in the Negro Leagues, and an acknowledgment that for several decades, some great ballplayers were kept out of the Major Leagues because of their skin color. It's time, though, to also acknowledge that several generations of Cuban players have suffered the same fate.
Posted by Sean Lahman at 11:32 AM

Texans at the Crossroads The Houston Texans have a record of 20-51 since they joined the National Football League, a figure that's not too unusual for an expansion team in the era of free agency and the salary cap. But Doug Drinen observes that they have found a way to win against one team, at least. With their victory against Jacksonville two weeks ago, the Texans are 5-4 (.555) all-time against the Jaguars, but just 15-47 (.242) against everybody else. I'm not sure whether that means anything statistically, but it sure is interesting.
After finishing with a 2-14 record last season, the Texans resisted public pressure to draft Heisman Trophy winner Reggie Bush, as well as the Heisman runner up, Houston native Vince Young. In doing so, they made a strong statement of support for quarterback David Carr, and the fifth year quarterback is having the best season of his career. Still, the team is just 2-5 heading into a tough game against the Giants this week. Thayer Evans of the New York Times calls Carr "an enigma in search of consistency" in an insightful story published this week. It's hard to not root for the guy, but at some point, he's either got to step up or step aside.

Other expansion teams have tried building around a young quarterback, but it's a recipe that hasn't worked. Kerry Collins imploded after three seasons in Carolina, forcing the team to start over. Tim Couch just fizzled in Cleveland, with the franchise's only playoff appearance coming when Couch was injured. If things don't improve for the Texans quickly, it may be time for them to make a change.
Posted by Sean Lahman at 11:08 AM