News just came over the wire that the Baltimore Ravens have fired head coach Brian Billick after a 5-11 season. If history is any indication, there will be a handful of other coaches out of work before the week is done. The average tenure for an NFL head coach is less than three seasons.
Posted by Sean at 2:28 PM 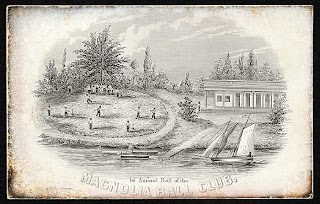 My friend and colleague John Thorn writes about an important early baseball find in his blog. John is not only a gifted writer, but the leading authority on 19th century baseball, particularly in the era before the civil war. Several years ago, Thorn found written documentation of baseball being played in Pittsfield, Massachusetts in 1791. That was more than thirty years before the earliest known reference to the game, and the first solid evidence of baseball being played in the 18th century.

Recently, Thorn stumbled upon the item above in the catalog of Leland's auction house. The item was described as an invitation to a ball, but Thorn correctly surmised that it was actually a ticket. After pouring through newspaper archives, he was able to determine that it was for an event in February 1843. More significantly, it was an event for the New York Magnolia Ball Club, an organization that was unknown to modern historians. Even more significant than that, perhaps, this is the earliest known image of men playing baseball.
Posted by Sean at 4:26 PM 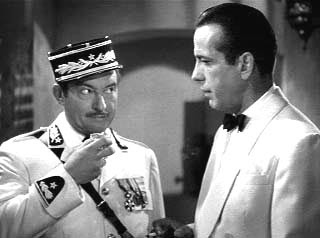 "I'm shocked, shocked to find that gambling
is going on in here!" -- Captain Renault in Casablanca
At 2 p.m. this afternoon, former Senator George Mitchell will release his report, serving up the results of his lengthy investigation into the use of performance enhancing drugs in baseball. Everyone is talking about the Mitchell report, speculating on what players' names might be revealed and what new details might emerge. Frankly, I don't understand the fuss. I don't need to know which player wrote a check to which clubhouse attendant to understand the big picture. Baseball has had a steroid problem for almost two decades, everyone knew it, and we all ignored it because we enjoyed the benefits that it brought. Attendance (and revenues) soared, the record books were re-written, and baseball bounced back from a devastating strike to enjoy a golden era.

Steroids were at the forefront of the public conscience in the late 1980s, particularly after Ben Johnson's world record performance at the Seoul Olympics was tainted by a failed drug test. In 1991, when Lyle Alzado revealed how years of steroid abuse ravaged his body, the NFL was forced to begin confronting the problem within their ranks.

Baseball was not immune to the problem, nor were they unaware of steroid use among players. Commissioner Fay Vincent proposed a drug policy in 1991, issuing a memorandum to all teams and urging them to confront the issue. (view the memo as a PDF) He specifically mentioned steroids, and warned about the damage that continued use could do to the game, to players, and to those who looked to ballplayers as role models. Both the owners and the players' union balked at the idea, and within a year, Vincent had been run out of office. 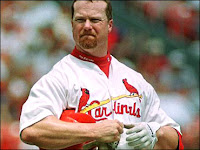 Over the next fifteen years, the issue of steroid use in baseball continued to force its way to the forefront. During Mark McGwire's record-setting 1998 season, he acknowledged using a steroid called androstenedione after reporters wrote about seeing bottles of it in his locker. Former MVPs Jose Canseco and Ken Caminiti later revealed not only that they had used steroids, but said the use of the substance was rampant in major league locker rooms. Canseco named names in his book, while Caminiti told Sports Illustrated that he estimated up to fifty percent of major league players were using steroids.

Padres General Manager Kevin Towers admitted that he suspected Caminiti was juiced, but kept quiet about it. "The truth is, we're in a competitive business," Towers told ESPN, "and these guys were putting up big numbers and helping your ballclub win games. You tended to turn your head on things."

Federal authorities made it a legal issue in 2003 when they raided the Bay Area Laboratory Cooperative, or BALCO, near San Francisco. The facility was alleged to manufacture performance enhancing drugs and distribute them to some of the world's top athletes. A series of reports by San Francisco Chronicle reporters Lance Williams and Mark Fainaru-Wada revealed the details of grand jury testimony, and began to reveal the names of some of the baseball players alleged to have received steroids from BALCO. Among them was Barry Bonds, the Giants slugger who was poised to break Henry Aaron's all-time home run record. 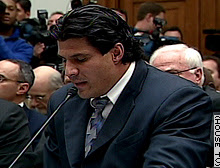 Still, despite all of this evidence staring everyone in the face, Commissioner Bud Selig and Players' Association chief Don Fehr both remained steadfast in their refusal to take action. It took Congressional hearing to get Baseball to institute a drug policy. In March of 2005, a House committee summoned players and executives to testify, and grilled them mercilessly on their failure to act.

That brings us to today, I suppose, when Mitchell will present a report that formally addresses the problem... sixteen years after Vincent's steroid memo. It's a necessary step and one that's long overdue. After all of the hype over the details of the report subsides, all that Mitchell has really done is to acknowledge what the whole world already knew. "Steroids in baseball? I'm shocked, shocked!"

Of course, the real issue isn't documenting what has happened in the past. What's really important is for the folks in Baseball to step up and do something. Let's hope they view this as a first step, an opportunity to get better, and not simply a final chapter to end the discussion.
Posted by Sean at 10:07 AM

How America Lost the War on Drugs

Great piece of journalism in the latest issue of Rolling Stone Magazine about the War on Drugs.

All told, the United States has spent an estimated $500 billion to fight drugs - with very little to show for it. Cocaine is now as cheap as it was when Escobar died and more heavily used. Methamphetamine, barely a presence in 1993, is now used by 1.5 million Americans and may be more addictive than crack. We have nearly 500,000 people behind bars for drug crimes - a twelvefold increase since 1980 - with no discernible effect on the drug traffic. Virtually the only success the government can claim is the decline in the number of Americans who smoke marijuana - and even on that count, it is not clear that federal prevention programs are responsible. 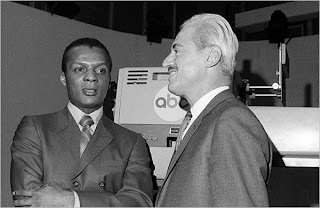 Marvin Miller (right) and Curt Flood, 1970
The Veterans' Committee today announced that they have elected five new memebers for the baseball Hall of Fame. Their selections include two former managers, two former owners, and a commissioner. For the fifth straight year, those with a vote chose to ignore Marvin Miller, head of the player's union from 1966 to 1984. When Miller was passed over a year ago, Murray Chass of the New York Times wrote:

Miller did more to influence the game and business of baseball than anyone in history except perhaps for Branch Rickey, who demolished baseball’s color barrier. Rickey brought black players into the game, and Miller made them wealthy. Miller did more than that, of course. He made it possible for all players to make a lot of money, and he improved their working conditions.

The folks that run Major League Baseball don't view that as a positive development. Gains for the players are losses for the owners. Thirty years after players earned free agency and the right to collective bargaining, it appears that some people are still holding a grudge

What's particularly egregious is that wile the voters showed no support for Miller, they were nearly unanimous in selecting his nemesis, former commissioner Bowie Kuhn. The 12-member committee cast 10 votes for Kuhn; Miller received just three.

Outrage over the snub was nearly universal. John Helyar of ESPN wrote: "As the intrepid head of the players union, Miller reshaped the sport's economics," he added. "As the inept figurehead of the owners, Kuhn tried to preserve the status quo. And lost every time."

Murray Chass wrote in the New York Times that the omission of Miller was not surprising but still embarassing. "That only 3 of the 12 voters on the new executives committee acknowledged his contribution, and voted for him, is a sad commentary on the committee members and the Hall’s board of directors, which concocted the committee." He added, "The National Baseball Hall of Fame has become a national joke."

Phil Rogers of the Chicago Tribune called Miller's omission disgraceful. "To deny Miller while honoring Kuhn insults the intelligence of the fans who will go to Cooperstown next July and lessens the credibility of the Hall's good work throughout history."
Posted by Sean at 1:31 PM