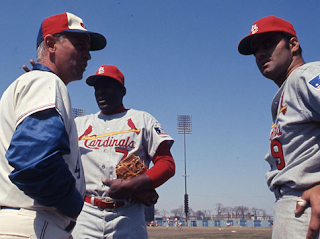 On their web site, the Archives of the city of Montreal recently posted a collection of color photos from the first home game of the Montreal Expos. That game took place on April 14, 1969, and it was the first Major League Baseball game played outside of the United States The images capture some of the game's greats, including Maury Wills, Rusty Staub, and Curt Flood. I like the photo above, which shows (from left to right) Expos manager Gene Mauch and Cardinals' players Bill White and Joe Torre. A quick look at the Retrosheet website shows that after the Expos jumped to an early 6-0 lead, the Cards came back with seven runs in the fourth inning, capped by Torre's two-run homer. The Expos tied the game on a wild pitch in the bottom of the fourth, and took the lead on an RBI single by relief pitcher Dan McGinn in the 7th, winning 8-7.

Most of the photos are from batting practice and the pregame cermonies. There are some great shots of Jarry Park, which was just supposed to be a temporary home but served as the Expos home until 1977. The text at the site is in French and the folks from the city archives haven't correctly identified some of the players in their photo captions, but the images are fantastic.

Update: I heard from Mario Robert, head of the archives, who read this blog post and accepted my offer to help identify some of the Cardinal players in the photos. Although he wasn't at that inaugural game, Mario told me an all too familiar tale of he and his schoolmates secretly listening to the game on a tranistor radio during class.
Posted by Sean at 7:05 AM