Why I Don't Root 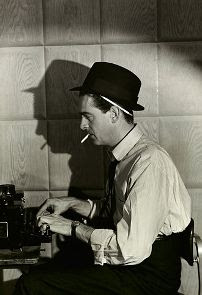 When people find out I'm a sportswriter, they often respond by saying how lucky I am to get paid to watch sports. They're right, but what they usually don't understand is how doing this for a living changes your perspective. For most folks, sports offer a diversion from their responsibilities, a chance to unwind after a hard day of work. For me, the game is the job.

Baseball writer Joel Sherman addressed the different perspectives of a fan and a sportswriter in his New York Post column yesterday. He was writing in response to Mets fans who complain he preferred the Yankees, and Yankees fans who complains he favored the Mets. "I root for two things," Sherman explains. "Short games and interesting story lines."

Even when I'm working on an encyclopedia or covering historical events, I have to do it with a certain detachment. Because at the end of the day, being a sportswriter is first and foremost about being a writer, not about being a fan.

Among the deadlines at this paper, one is at about 11 p.m. Which means you have to write as the game is going on. When I was the beat guy I cannot even quantify how many times I had a story complete, and watched as Dave Righetti or Steve Farr or John Wetteland coughed it up and made me totally re-write hundreds and hundreds of words with essentially no time left on the clock to do it. There was a time, when I was younger, that I would be mentally begging for that not to happen. And then you realize -- when it does happen several dozen times -- that it is just wasted energy.

When Mariano Rivera blew the ninth-inning save in Game 7 of the 2001 World Series against the Diamondbacks, you could either sob about the wonderful column you think you have in front of you trumpeting the Yankees' fourth straight World Series championship or flip instantly into re-write mode and be a pro. There is often just not time to care or root. I like Mariano Rivera as much as any athlete I have ever covered because I find him so excellent on the field and dignified off of it. But in that moment when several hundred words must be redone, who cares? A fan cares that's who. As for me, my allegiance is to the column.