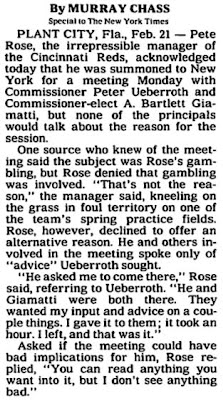 It all started with this... Pete Rose being summoned to New York by the Commissioner in February 1989. It was the public's first inkling of the story that would dominate the rest of the year.
Posted by Sean at 12:01 AM

Todd Haley was introduced as the new head coach of the Kansas City Chiefs today. Since the start of the 2008 season, eleven teams have changed head coaches. That ties the record for the most coaching changes from one opening day to the next, set in 1997. Collectively, the NFL teams have made 32 new hires over the last four years, with six teams having changed coaches at least twice (and that's not even counting interim coaches).

This level of turnover is unprecedented. In addition to the eleven first year coaches, the league will have 13 other coaches with three full seasons (or less) at the helm of their current team. Only eight coaches will have been with their team for more than five seasons. Here's the list:

The 15 in that first column means that if he makes it to opening day, it'll be the start of Jeff Fisher's 15th full season as the Titans head coach.

I think we're seeing a couple of different things at work here. One is clearly a lack of patience. Most of the guys who were fired were first time head coaches who had been on the job for just four years or less. For most teams, if you can't win after three years, you're going to lose your job. Only one NFL coach -- Buffalo's Dick Jauron -- kept his job after posting a third straight losing season.

That's a fact that the folks in Buffalo are finding hard to stomach, especially in an environment when coaches with winning records are being fired simply for missing the playoffs. The Jets dumped Eric Mangini even though his team improved from 4-12 to 9-7. Jon Gruden was ousted in Tampa after back-to-back 9-7 seasons. The Broncos fired Mike Shanahan after a late season collapse meant his team would miss the playoffs for a third straight season.

Gruden and Shanahan each had more than ten years of head coaching experience, as did both Tony Dungy and Mike Holmgren, who retired. What's striking is that with eleven openings for head coaches, nine of them went to a young assistant who've never held the top job in the professional ranks. As a group, the 11 departing coaches combined for 84 seasons of head coaching experience. The incoming group has just six.

As others may have noted, this leaves just three active coaches with Super Bowl wins (Tom Coughlin, Bill Belichick, and Pittsburgh's Mike Tomlin), There are twice as many Super Bowl winning coaches on the open market right now (Bill Cowher, Brian Billick, Shanahan, Gruden, and the "retirees" Holmgren and Dungy).

Shanahan is one of 12 coaches with 2 Super Bowl wins, and just the second to be fired by that same team. Tom Landry was the first. When the legendary coach was unceremoniously dumped by new team owner Jerry Jones, it had been six years since Landry's Cowboys had been to the playoffs and 11 since his Super Bowl XII win. (If you consider Tom Flores "promotion" to the Raiders front office a firing, he'd also be a coach with 2 Super Bowl wins who got the ax. Coincidentally, his replacement was Shanahan).

Through today, 26 head coaches have won Super Bowls, and 13 of those guys eventually left the team they won a title with to lead another team. The table below shows how well they fared with the new team.


The only guy who found continued success was Bill Parcells, who took the Patriots to the Super Bowl during his next stop. He also turned around moribund franchises in New York, Dallas, and Miami. Holmgren took the Seahawks to a Super Bowl but also endured a number of lean years. Johnson's record in Miami looks impressive, until you realize the team actually fared better in their last four years under his predecessor, Don Shula (39-25, with three playoff appearances). Ditka and Seifert were disastrous.

I think this illustrates one of the reasons why many teams weren't clamoring to hire these coaches with proven track records. There's little evidence that that success can translate from one organization to another.

But more than that, I think if you look at the coaches who were shown the door, a common thread for many of them is that they commanded complete control of the football operation. There was a trend in the 90s towards giving coaches that sort of authority. Parcells once complained, "If they want you to cook the dinner, at least they ought to let you shop for some of the groceries." He eventually was given that level of control, as was Holmgren when he went to Seattle, and as were Gruden and Shanahan. None of the new hires -- including the ones with previous head coaching experience -- are being given that kind of authority, and that may be why some of the Super Bowl winning coaches find it difficult to even get interviews for job openings. Teams look towards the model of success in places like New England and Pittsburgh, where a skilled and professional front office team focuses on stocking the roster with talented players and lets the coaches focus on coaching. Those two teams account for five of the last eight Super Bowl championships. Whether other teams can duplicate that success remains to be seen, but that's certainly the path they've chosen.

And there's no reason to expect that will change anytime soon. The Cardinals and Steelers both got to the Super Bowl this season with a second year head coach, and the Falcons and Dolphins both had remarkable turnarounds with a rookie coach. They've all shown that you can win right away, and that you don't have to wait years for a coach to get things turned around.

Unless you're in Buffalo.
Posted by Sean at 5:30 PM

Why Newspapers Will Disappear Sooner Than You Think

Nicholas Carson of Silicon Alley Insider runs the numbers to show just how much it costs to print an ink-and-paper version of the New York Times, and he reaches this conclusion:

It costs the Times about twice as much money to print and deliver the newspaper over a year as it would cost to send each of its subscribers a brand new Amazon Kindle instead.

Carson estimates the figure is $644 million per year, with a subscriber base of about 830,000. That works out to about $745 per subscriber, which is a problem, since the $8 per week subscription fee works out to $416 a year. That means they have to generate $300 million a year in advertising revenue just to break even, and we're still just talking about printing costs. We haven't factored in delivery costs or salaries for reporters, photographers, and other content creators.

How can that type of business model ever compete with an electronic alternative?
Posted by Sean at 2:00 AM

One of the great films of all-time.
Posted by Sean at 6:00 AM