On Tuesday, I'll be talking about my book and signing copies at the Barnes and Noble on the campus of the Rochester Institute of Technology. I'll be there from 6:00 to 7:00. if you're in the area, stop by and say hello.

Later that night I'll be making a radio appearance with Papa Joe Chevalier on KLAV 1230 AM out of Las Vegas. You can also listen online. I'll be on around 7:40 eastern time.
Posted by Sean at 8:44 PM 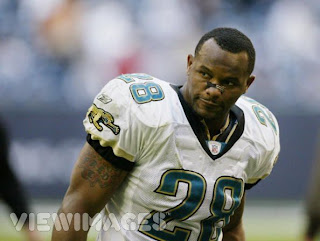 My new book has been out for about a month. Yes, I know I'm lousy when it comes to self promotion, but the sales have been strong and the reviews have been very good.
Of all the press I've received, my favorite piece comes from an NFL player who took umbrage at where I had ranked him. Fred Taylor of the Jacksonville Jaguars told a Florida Times-Union reporter that I was crazy for ranking him as only the 35th best running back of all-time.

"Tell that dude I'm one of the top five running backs of all time," Taylor said. "Looking at the caliber of running backs that have played the game, I'm definitely in the top 10. I've got to prove him wrong and make the top 10 before it's all said and done."

USA Today and Gannett have both had good reviews, and the Library Journal -- which reviews new books for librarians to consider purchasing -- gave it a starred review. More details at my website.
Posted by Sean at 9:39 AM

Got word late Wednesday night that the New York Sun will likely cease publication at the end of September. Editor Seth Lipsky explained to staff that despite the critical success the paper has received, the financial challenges appear to be too much to overcome. The newspaper business is suffering a slow death, and the goal of launching a new broadsheet in a city already served by six daily papers was an audacious one. Lipsky's letter to readers offers more details.

I've written hundreds of colums for the Sun since they launched, mostly covering the Jets and Giants. It's been a great experience. I've worked with some great editors, covered a game I love, and had a chance to meet some of the great players and coaches of this generation. I hope to continue writing for the Sun right up until the final edition.
Posted by Sean at 7:23 PM