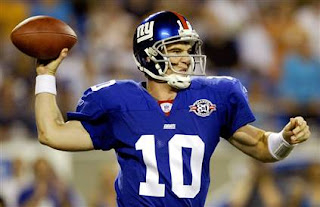 A lot of folks have been jumping on the Eli Manning bandwagon this week. I've been a big supporter of his from day one. In my New York Sun column, I urged the Giants to make the bold move to trade up in the 2004 draft. I saw him play early in training camp before the start of his rookie season, and I've written a lot about him during his four seasons.

Manning's three playoff wins have made most Giants fans feel as if their patience with the young quarterback is finally paying off. But when did we begin to think that four years was a long time for a quarterback to develop? I tackled that question in my New York Sun column this week.

As fans, our expectations for young quarterbacks have been dramatically skewed by the sudden success of two recent signal callers. In 1999, Kurt Warner led the St. Louis Rams to the Super Bowl in his first season as an NFL starter. Two years later, Tom Brady achieved the same feat with the New England Patriots. That sort of immediate achievement is exceptionally rare. Historically, it has taken longer for quarterbacks to develop and achieve success at the professional level.

Terry Bradshaw struggled through his first five seasons, throwing more interceptions than touchdowns in each of those years as he struggled to hold on to his starting job. Roger Staubach didn't become the Cowboys' starter until he was 29 years old, and Steve Young turned 30 before he finally took the helm in San Francisco. And there are plenty of examples of great quarterbacks, from Johnny Unitas to Brett Favre, who only found success after failing with their first team (or in the case of Len Dawson, after failing with his first two teams).

Seven for the Hall

On Saturday, the Pro Football Hall of Fame will announce its selections for the class of 2008. I'm not on the 44-man committee that gets to vote, but I've spent most of the past two years rating and ranking the best players in pro football history for my new book. Based on my research, here's a look at who I think the most deserving candidates are.

Randall McDaniel - He had that funky stance, with his left leg bent awkwardly to his side. If you didn't know any better, you'd take one look and think the guy didn't know how to play the position. He couldn't even get into a proper three point stance, but he was a dominating blocker. With McDaniel anchoring the line, the Vikings became an offensive juggernaut in the nineties. During his thirteen year career, McDaniel blocked for five different 1000-yard rushers and four 3,000-yard passers.

Darrell Green - One of the great cornerbacks of the nineties, Green seems like an obvious choice in his first year of eligibility. With Rod Woodson and Deion Sanders coming onto the ballot in the next few years, the field will get crowded with great cornerbacks. Green was one of the fastest players of his generation, and as the trend shifted towards taller more physical receivers, he continued to hold his own.

Emmitt Thomas - Nominated by the seniors' committee since he retired before 1982. Thomas led the league in interceptions twice and still ranks in the top-ten for career interceptions. Seniors committee candidates have already been through one selection process, and by making it this far they're almost assured of being selected.

Richard Dent - His individual performance is often overlooked because he was part of that dominating Bears defense. Dent's ability to rush the quarterback from the outside was one of the keys to making that 46 defense work. He ranked third all-time in sacks when he retired.

Art Monk - There have been more arguments over Monk's candidacy than any other player since the Hall of Fame opened. I think there's a strong case for his inclusion, which I documented at length in my forthcoming book, the Pro Football Historical Abstract. For most guys, it's a question of whether they were good enough. In Monk's case, I think it's more about understanding the context of what he did and why, in the case of the current board of selectors, his contributions have been dramatically undervalued.

Derrick Thomas - Frankly, I'm surprised he's not in already. At his peak, Thomas ranked with Lawrence Taylor as the best pass rushing outside linebacker of all-time. His tragic death in an automobile accident cut his career short, and kept him from pushing his sack totals to the top of the record book. He finished with 126.5, fourth highest ever for a linebacker, and probably a season and a half short of Taylor's high mark.

Ray Guy - I don't think he was the best punter of all time, but 99% of the public does. After 45 years, there's still only one special teams player in Canton. I don;t think Guy's an unworthy choice, and I think inducting him would open the door for other greatly deserving candidates who have been ignored because they were kickers, punters, or return men.

That leaves ten candidates who wouldn't get my vote, at least not this time around. They are:
I'm not saying that none of these guys are worthy of induction, but the rules limit each year's class to a maximum of seven.
Posted by Sean at 6:53 AM

The Real Cost of Stadium Spending 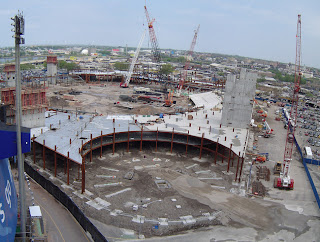 The booming economy of the 1990s spawned a building craze for pro sports. Team owners convinced state and local governments to build new stadiums and arenas for them, with the threat of moving to another city as the alternative. Seventy-two new venues were built between 1990 and 2005, creating a new home for two-thirds of the teams in the NFL, NBA, NHL, and Major League Baseball. The argument team owners made was that having a major league team boosts your city's prestige, creates jobs, and helps stimulate the local economy. It's hard to argue the first point, but it's much tougher to find evidence for the economical claims.

Because governments are spending money on baseball stadiums and football stadiums and other arenas, they don’t have money for youth programs and for parks. And I show in the book that this subsidy...and some others are intimately connected with the rise of youth gangs in America. Because we’ve starved our parks for money and recreation, we have eliminated all sorts of programs.

Regardless of your political views, it's hard to get around the dichotomy this situation creates. Conservatives complain about how much we spend on social programs. Liberals lament the growing numbers of people without health insurance. But as a society, we're willing to spend hundreds of billions of dollars to build sports venues for millionaire team owners. That just doesn't make any sense to me.
Posted by Sean at 11:01 AM