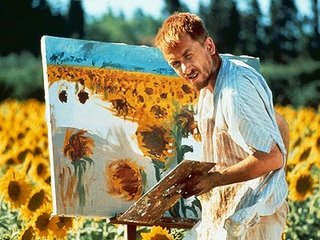 This article originally appeared in the March 2005 issue of "Overlooked Gems."
Several films have been made about the life of Dutch painter Vincent van Gogh, and most people know the broad strokes of his life’s story. Robert Altman’s 1990 film “Vincent and Theo” goes beneath the surface of a man who became a pop culture icon and probes the complex issues. Altman avoids the easy clichés of the tortured artist, focusing on the two bitter realities of the painter’s life: Vincent Van Gogh was tremendously passionate about his work, and nobody wanted to buy it.

The film opens in 1987, where one of his most well known paintings is on the auction block. As the bids rise quickly into millions of pounds, the image shifts to a destitute Van Gogh a hundred years earlier, a young man desperate to escape the misery of his own life. Tim Roth brings a fresh perspective to the role of Van Gogh, revealing a man who is tormented by his lack of success in life, personally as much as professionally.

Kirk Douglas portrayed Van Gogh in the more popular biopic, “Lust for Life,” but in that 1956 film, the artist’s principal influence was fellow painter Paul Gaugin. In that version of the story, Gaugin overshadowed Van Gogh in many ways, and it’s not surprising that Anthony Quinn won a Supporting Actor Oscar for his portrayal. In Altman’s version, Van Gogh’s mentor and chief supporter is his brother, Theo, a Parisian art dealer.

Theo (played by Paul Rhys) recognized his brother’s talent, encouraged him to pursue his art, helped him to meet and collaborate with the top painters of his day, but in the end, was unable to help his brother. He could never sell any of his paintings, couldn’t help him escape the self-destructive behavior of his personal life, and ultimately, couldn’t help him overcome the mental illness that led to his suicide.

The relationship between the brothers is the core of the film. Both struggle desperately for their own measure of fulfillment, and both are raging at their own failures. In each other, they find both solace and support, but neither can help the other to overcome the obstacles that doom them to lives of unhappiness.

As with all of Altman’s films, “Vincent and Theo” is about characters, not plot. It’s not a story of the events of their lives so much as it is an account of who these two brothers were and how they saw the world. One of the great achievements here is how Altman and cinematographer Jean Lépine show us the world the way that Van Gogh saw it. We see the mundane scenes of his life that we recognize from his paintings... his bedroom, the café at night, the church, even the countryside. It’s one thing to know the facts of a person’s life; it’s another thing altogether to feel as if you’ve inhabited his world.

This film received only a limited theatrical release, and as of this writing has never been available on DVD. [Editor's note: the film was finally released on DVD in August 2005.] It received no award nominations and remains largely unknown, save for the occasional airing on cable television. It was a breakthrough performance for Roth, and one of the best films in Altman’s fifty-year career. Most significantly, it is a fascinating portrait of a complex and contradictory genius... and his brother the painter.
Posted by Sean at 10:38 PM