On the Radio this Week

Recollections from a Thanksgiving day forty years ago, from the website Common Ties.

Thanksgiving 1968, a hill near the DMZ and Laotian border, South Vietnam

By Norman Milliken (second from left)

It was 1968. Thanksgiving Day in Vietnam. We were dug in on a ridgeline, about a thousand meters from the DMZ, close to the Laotian border. There was talk of hot food for the holiday, flown out from LZ Stud in thermal containers. These rumors gained wide currency in a place where food and sleep were the only obsessions worth having. Food, sleep, and rotating back to the world after 13 months in the bush.

The ground was hard digging, and I was tired beyond description. The mountains, the pack I carried, the machine gun, mortar shells, and thousands of rounds of gun ammo - it was all too much. The thought of hot food, real food, tailed off in my mind like a dream. Everyone wanted that food. Potatoes, we imagined. Potatoes with gravy and turkey with stuffing. Cranberry gel and bread. Maybe even butter. Once, in the summer, milk was delivered out in the field. It was sour, but so cold it made your head ache. So, we imagined cold milk, too.

As the day stretched out, we waited for the choppers. Arguments broke out over who would win the game in Detroit. The captain ordered a perimeter sweep. We took a reinforced squad and moved quickly up one side of the ridge and down the other. We were so far from anywhere that we went fast. The NVA weren’t too active this deep in the hills. We finished our sweep and set in. The choppers were late.

I remembered other Thanksgivings. We all did. Mine were filled with memories that probably weren’t real. I constructed the past as I wished it to be, and that was just fine. In a place where there was nothing but present-tense life, we created a past with a truth all its own. And we waited for the helicopters.

Deep in the afternoon we heard them.

There were two Chinooks bending over the horizon, cargo nets hanging beneath them. We wanted those nets to have hot food containers. Thanksgiving dinner there in the hills, 10,000 miles from home. An unloading party was organized. We all wanted to be on it for a change.

The nets were landed and cut loose. The choppers flew away, and the silence closed in on us again. There was ammo re-supply. C-rations and a huge bag of heat tabs. Thanksgiving dinner would be c-rations as hot as we wanted them. You could’ve cut the disappointment with a knife. Thanksgiving came and went.

Five years before I had been a senior in high school. Five years hence, I would be a senior in college. In less than a month, I would be lying in a hospital in Yokohama, Japan, my right leg under imminent threat of amputation. Yet, I remember that Thanksgiving in detail I could never muster for other days. The hills and the jungle and the infinite fatigue in my legs. And the smell of my Thanksgiving dinner, a hot little can against my fingers, filling me up against my will.

Norman Milliken is a retired school teacher who served with the United States Marine Corps in South Vietnam in 1968. A combat infantryman, he carried an M-60 machine gun. 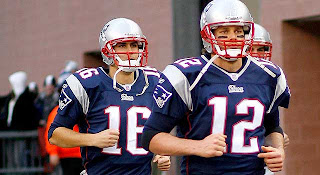 If you haven't noticed, the Patriots once again have an obscure backup quarterback playing like an MVP and leading them towards the playoffs. Interesting observations on the phenomenon from Sports Illustrated's Peter King in his column today.

It's crazy and all-too-soon and slightly irreverent. But it is also unavoidable. Life is imitating art. The career path of Cassel is following Brady's. Brady's record after 11 games: 8-3. Cassel's: 7-4 -- and if the Pats had won the overtime coin flip a week ago Thursday, I bet those records would be the same. Brady's rating: 91.6. Cassel's: 90.5. Cassel leads Brady by 377 passing yards, thanks to Cassel's back-to-back 400-yard passing games. (Been on Mars? That's no misprint.) As for touchdowns, Brady leads Cassel by three.

It's hard to fathom what we're seeing. Brady, the 199th pick in the 2000 draft, has won three Super Bowls and will be a Hall of Famer on the first ballot. Cassel, the 230th pick in 2005, hasn't won anything big yet, but he has thrown for more yards than Brett Favre this season (2,615 to 2,461) and for a higher passer rating than Peyton Manning (90.5 to 87.2) and for more yards per pass attempt than Eli Manning. The Patriots' system works, and it works wonders. 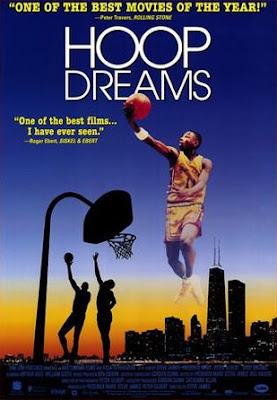 For my money, Hoop Dreams is one of the best documentary films ever made. It tells the story of two teenage boys from inner city Chicago who hope to become professional basketball players. What makes it such a compelling story is that it's not about basketball, its about two kids who see their athletic talent as a ticket out of poverty. I'm not spoiling anything by telling you that neither one makes it to the NBA.

Earlier this month, Sarah Olkon of the Chicago Tribune followed up with William Gates and Arthur Agee, the stars of the 1994 documentary, to see how their lives have turned out. Now 35, the two have remained close through the ups and downs the followed the end of the film.
Posted by Sean at 7:25 AM

Life magazine has just made its entire photo archive available on Google, including millions of unpublished images that have never been seen before. Chronologically, they span nearly 150 years, from Abraham Lincoln on a Civil War battlefield to Tina Fey and Tracy Morgan on the set of their show 30Rock.

There are some fantastic sports photos here, too. This shot captures the NFL's sixteen starting quarterbacks just prior to the 1961 season. Six of these guys went on to the Hall of Fame (In the back row, Bobby Layne #22, Bart Starr #15, Johnny Unitas #19. In the front row, Fran Tarkenton #10, Sonny Jurgensen #9, Y.A. Tittle #14. 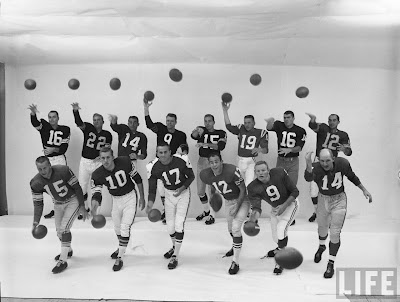 There are some great color shots, too, including the one below of a gaunt Babe Ruth making his farewell appearance at Yankee Stadium in 1948. 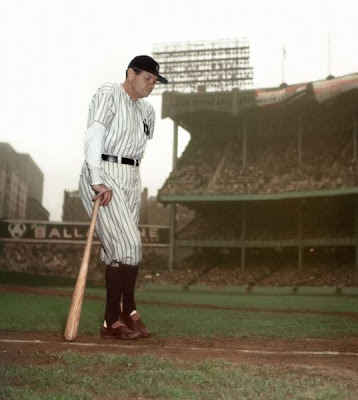 I also found this shot of Sonny Liston on the canvas after he's been knocked out by Cassius Clay. Most of the photographers focused on an exuberant Clay, but George Silk captured a great image of Liston rising to his knees, with what seems to be an angry gaze across the ring towards the man who just took the Heavyweight Championship away. 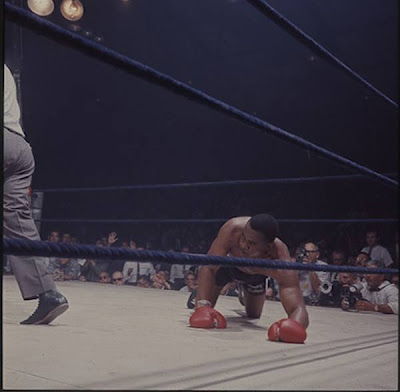 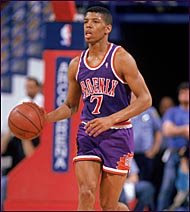 Former Phoenix Suns point guard Kevin Johnson was elected Mayor of Sacramento yesterday. He was one of more than a dozen former athletes who were seeking office last night.

Heath Shuler, a Heisman Trophy runner-up at Tennessee who played quarterback for the Washington Redskins and New Orleans Saints, was re-elected to Congress for his second term. Another former NFL quarterback and head coach, Sam Wyche, won a seat on the Pickens County Council in South Carolina. Peter Boulware ran for state legislature in Florida. The former Ravens linebacker appears headed for a recount.

Among those who were unsuccessful in their election bids last night was Joe Mesi, a top heavyweight boxer from Buffalo. He sat behind me at the Hasim Rahman bout last June and has 36-0 record in the ring, but lost his bid for a New York state Senate seat.
Posted by Sean at 10:12 AM