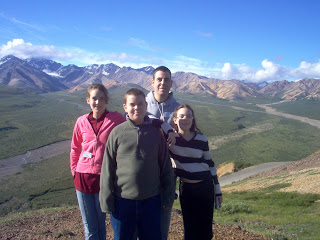 Just returned from a two-week trip to Alaska with the family. We flew into Fairbanks, then made our way gradually south towards Anchorage on the Alaska Railroad. It was an amazing experience. We'd ride for miles without seeing a house or a road or any signs of human life. The word that kept springing to mind was "pristine." The scenery was breathtaking just about everywhere you looked, and most of the geography was undisturbed by man.

I saw and did too much to describe in a single blog posting, but if you're curious, I'd invite you to check out what we have posted at our family web site -- lahman.org. Between myself and the three kids, we took wel over 3500 pictures with our digital cameras. I posted a few each day when I could get internet access, and once we returned I uploaded low res versions of everything else.

Because we were doing so much, I kept a journal of our activities. Otherwise, I knew I'd forget some of the amazing things we got to experience. As time permits, I hope to make that journal available at the family website along with edited versions of the best pictures. My younger daughter Hannah is doing the same thing with her written journal, and Audrey, her older sister, made posts to her blog during the trip.
Posted by Sean Lahman at 2:56 PM 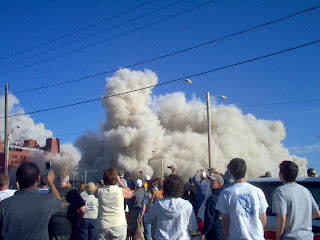 I went with my son and daughter to Kodak Park early this morning. The photo giant had announced weeks ago that they were going to demolish two large buildings by imploding them, one yesterday and the other today. We trekked out there both mornings, along with thousands of other people who wanted to see the show. On both occasions, the whole thing lasted about ten seconds, but it was definitely a unique experience. The destruction of an eight story building is probably the biggest sudden release of energy you can witness outside of a war zone. The noise was tremendous, and the force of the falling structure made the ground shake where we were standing, about a thousand feet away. (Hannah took videos of each with her digital camera, first Saturday and again on Sunday. She also took the three pictures that accompany this article.)

Eastman Kodak was once the largest employer in Rochester and Kodak Park, the company's main campus. was like a city unto itself. The 2200-acre facility had its own fire department, dozens of cafeterias, bank branches, shoe stores, and even a bowling alley. George Eastman is buried on the grounds, a sign, I suppose, of the power and influence the company founder held even after his death.

That company has been dying a slow death over the past decade. I left my job at Kodak in 1999, convinced that the company's half-hearted attempts to enter the digital imaging market had misfired, and that their failure to adapt to the changing marketplace would result in a lot of local folks being shown the door. I was definitely right about the latter, with several rounds of layoffs coming in the first few years after I left. Then the company dropped a bombshell, announcing their plans to slash the local workforce from 21,000 to 13,000 by 2007. With fewer employees, of course, they didn't need so much space. The destruction of these two buildings this weekend was part of a massive demolition effort that's been taking place at Kodak Park, with more than half of the facility's 212 buildings being torn down in a span of a few years. 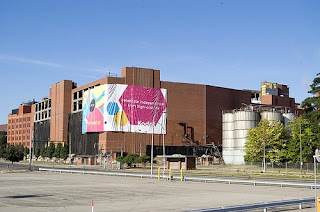 And so this weekend, I couldn't help but be a little puzzled by the celebratory atmosphere the Kodak PR people tried to muster. There were large banners on the doomed buildings trumpeting their new inkjet printers. Apparently those folks weren't troubled by the image of their new product line being blown up and being consumed by smoke and rubble. The Kodak folks wore festive t-shirts, led cheers over a loudspeaker, and released a flock of balloons. I gotta say, the whole thing was just surreal. 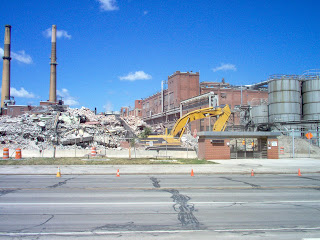 Building nine, which came down Saturday, housed Kodak's paper manufacturing facility. The company once held a monopoly on that booming business, but no longer. This wasn't just the destruction of a building but the end of the line for what was once one of Kodak's core businesses. It's one thing to say that this is the beginning of a new era, but there has to be more than optimism to suggest that there is something new and exciting still to come.

The local paper had some great coverage of the events, including this slide show of the crowd gathered to watch. I can't help but make two observations. First, there were an awful lot of former Kodak employees who had come out. Second, nearly everyone had a camera, and very few of them were Kodak cameras.

This weekend was a funeral for a once thriving company that is no more. If a new company emerges, one based on digital technologies, well that's fantastic. But let's not be quite so giddy when saying farewell to George Eastman's empire. The impact of Kodak's fall will reverberate throughout the community long after the debris of these buildings is carried away.
Posted by Sean Lahman at 7:11 PM