Boxing: Alive But Not So Well 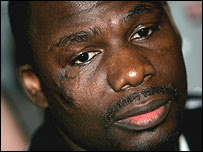 Last night I went with friends to see the fights. The main event featured former two-time Heavyweight champion Hasim Rahman, attempting a comeback after losing his title last August. I'd love to see him succeed, not only because he's a local guy, spending the last few years training here in Rochester. More importantly, he's really the only American fighter who seems capable of getting a fight for the Heavyweight championship. Right now, all three of the heavyweight belts are held by fighters from former Soviet countries: Oleg Maskaev of Russia (WBC), Wladamir Klitschko from the Ukraine (WBA) , and Ruslan Chagev out of Uzbekistan (IBF).

Of course, the alphabet soup is one of the main reasons why boxing's popularity has faded in the United States. Three different sanctioning bodies each anoint their own champions, and they've each added new weight classes so that nearly every bout that takes place is some sort of championship fight. Fifty years ago, their were just eight weight classes, each with their own champion. Now there are nearly sixty champions, and that sort of dilution makes it difficult for fans to follow.

The bigger problem in my mind is that the quality of boxing has declined in the last decade, and that was evident in Rahman's fight last night. He weighed in at 261 pounds -- 25 pounds heavier than when he knocked out Lennox Lewis and more than thirty pounds heavier than when he fought Evander Holyfield. Rahman should have easily outclassed opponent Taurus Sykes, but he was out of shape, and plodded around the ring hoping to win the fight with one big punch. The two fighters spent most of the night clinching and holding, never throwing enough punches to get the crowd engaged. It was like watching two men do a slow dance. Rahman did manage to knock Sykes down in the 11th round and won a unanimous decision. However, his inability to take control of the fight and the fact that he was so out of shape suggest that his comeback attempts might not be a good idea. I'm rooting for the guy, but I didn't see any sign that the 34-year old had anything left.

Despite all of this, there are still boxing fans hungry for action. I've seen them at the bouts scheduled in Rochester and Buffalo. I've seen them clamoring for big pay per view events like the DeLaHoya - Mayweather fight in May. And I saw them at the Boxing Hall of Fame last weekend for the annual induction ceremonies. They all long for the excitement that the sport used to offer. Sadly, there's too little of that excitement left.
Posted by Sean Lahman at 10:08 AM