The NFL season is about to get underway, and once again I'll be writing weekly game previews for the New York Sun. It'll be my fifth season covering the Jets and Giants for the Sun, and I've really enjoyed that opportunity. Both teams should be competitive in what will be very competitive divisions. 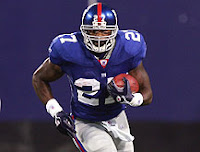 Much of the offseason discussion about both teams has focused on their quarterbacks and head coaches, but I think that the success of each club will depend largely on their new running backs. The Giants have to replace Tiki Barber, who opted to retire to pursue a career in broadcasting. They'll count on third-year player Brandon Jacobs, a tall athletic back whose running style reminds me of Eric Dickerson. I'm not suggesting he'll be the kind of dominating back that Dickerson was, but he runs with the same upright style and has a similar easy gait that masks his speed. 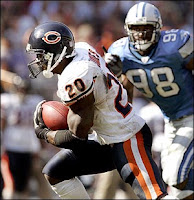 The Jets made the playoffs last year despite their inability to tun the ball consistently. A trio of unimpressive backs just didn't get the job done. To solve that problem, the Jets traded a second round draft pick to the Bears for Thomas Jones. A big powerful back, Jones rushed for 1210 yards last year and helped lead Chicago to the Super Bowl. He doesn't have the kind of explosiveness that will lead to big plays, but he might help the Jets control the clock by pounding the ball up the middle.

My previews will appear in the Sun on Fridays during the season, or on Thursday/Monday when the teams play on those days. You can read them at the New York Sun web site or in the archive section of my own web site.
Posted by Sean at 10:43 AM