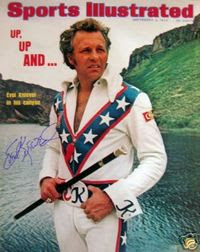 I hate to post three obituaries in a row, but I can't let this one pass without mentioning it. CNN reports that Evel Knievel has died today at the age of 69. His action figures were the "must have" toys when I was in second grade. Long before I was aware of professional sports or movie stars, my room was adorned with Evel Knievel posters. I had the Evel Knievel lunch box, and even his full length LP, an odd mix of songs and interviews. He retired in 1980, but had enjoyed something of a revival as a pop culture icon in recent years. The report says that he had been in poor health for several years.

Looking back, it sure seems like his success rate wasn't too high. His attempt to jump over the Snake River Canyon was a bust, and his jumps at Caesar's Palace and Wembley Stadium ended with an ambulance ride. Still, you can't deny that he was a remarkable showman, and he came around just at the right time. A guy like that would never get a chance to become an international celebrity today.

And a final bizarre footnote, the wire services were reporting just yesterday that Knievel had settled his lawsuit with Kanye West after the rapper visited him at his home. The articles included a strange photo of the two, probably taken just two days ago.
Posted by Sean at 5:08 PM

Doctor Robert Cade, the University of Florida researcher who invented Gatorade has died. He was 80.

His concoction was born after the school's football coach asked him why his players "don't wee-wee after a game." Cade learned that the problem was dehydration, and his drink helped the Gators players replace carbohydrates and electrolytes lost through sweat while playing in swamp-like heat. The product took it's name from the team, and would spark a $5.5 billion a year sports drink market.

In a 2005 interview, Cade said he was proud that Gatorade was based on research into what the body loses in exercise. "The other sports drinks were created by marketing companies," he said.
Posted by Sean at 2:39 PM 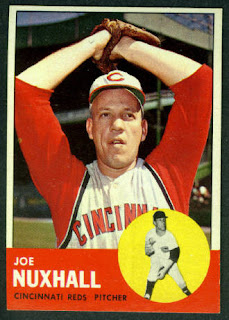 News out of Cincinnati that Joe Nuxhall has died... He spent 31 years as a radio broadcaster for the Reds, with a unique style that made him immensely popular with his listeners. My own interest in baseball grew from listening to his accounts on the radio as a nine or ten year old boy in Cincinnati. He always ended the night with his signature phrase -- "this is the ol' lefthander, rounding third and heading for home."

Nuxhall made his major league debut in 1944 when he was just 15 years old, making him the youngest player in modern baseball history. He retired the first two batters he faced, but got rattled when Stan Musial came up to the plate. The legendary hitter lined a base hit, and the Cardinals scored five runs before manager Bill McKenchie took the kid out of the game. Nuxhall was sent to the minors and didn't return to the big leagues for eight years. By then, he'd become a confident young pitcher. His best season was probably 1955, when he went 17-12 and earned the first of two all-star appearances. The Reds traded him to Kansas City in 1961, so he missed Cincinnati's trip to the World Series that fall. He returned as a free agent in June of 1962 and pitched for the Reds until he retired in 1966.
Posted by Sean at 2:53 PM